In my book, I analyze quantitatively cross-national variations in the effect of education on social and political tolerance based on a large-scale survey. I ask to what extent the effect of education on political and social tolerance varies cross-nationally and I give an inventory of micro- and macro-level factors moderating this effect. The empirical analysis is based on comparative surveys (World Value Survey) across 24 and 33 countries at two time-points. I identify individual-level and country-level factors that may influence the relationship between education and tolerance. I show empirically that education contributes to more tolerant views only in countries with certain political, socio-economic and cultural backgrounds and that the positive effect of education does not always overcome the negative effects of personality characteristics and low socio-economic status. Overall, the book argues that there are several micro- and macro-level conditions that should be fulfilled before one may proclaim education as the universal problem solver.

The book can be found at Peter Lang or Amazon.

You can also read a book-review-by-Fumika-Nishida (in Japanese). 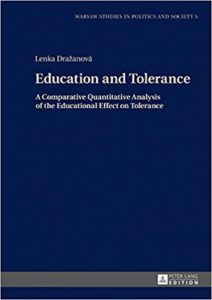